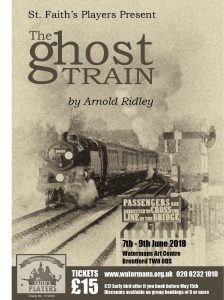 Duration:  2 ¼ hours including one interval

Book 6 or more tickets and your ticket will be free of charge.

The play is not suitable for under 11s

‘The Ghost Train’ was written by Arnold Ridley who is probably better known nowadays as Private Godfrey in the long running, often repeated TV series, `Dad’s Army’, than as a playwright.    The play was first produced in November 1925 and had a very successful long run in the West End and in 1926 it was transferred to Broadway.  It is the most well known of the thirty or so plays he wrote through his long career.

This will be St Faith’s Players second production to be staged at the Watermans Art Centre, `Dick Whittington’ was presented in the theatre and proved very popular with everyone involved, including the audiences, so the group will be back there at the end of November with another traditional family Pantomime.  ‘The Ghost Train’ requires a smaller, more intimate space so Studio 1 is ideal.

The action takes place in November 1925 in the small General Waiting-room at Fal Vale, a wayside station on the South Cornwall Joint Railway, during one evening.  The story of the ghost train is well known to the local villagers who avoid the station on dark wintry nights……